This is the newsletter of UK author Tim Walker. It aims to be monthly and typically includes: book news and offers, guest author profiles, book reviews, flash fiction and poetry.
Readers of this newsletter are invited to volunteer for the guest author slot, submit a book review, flash fiction story (up to 250 words) or poem to timwalker1666@gmail.com for future issues. 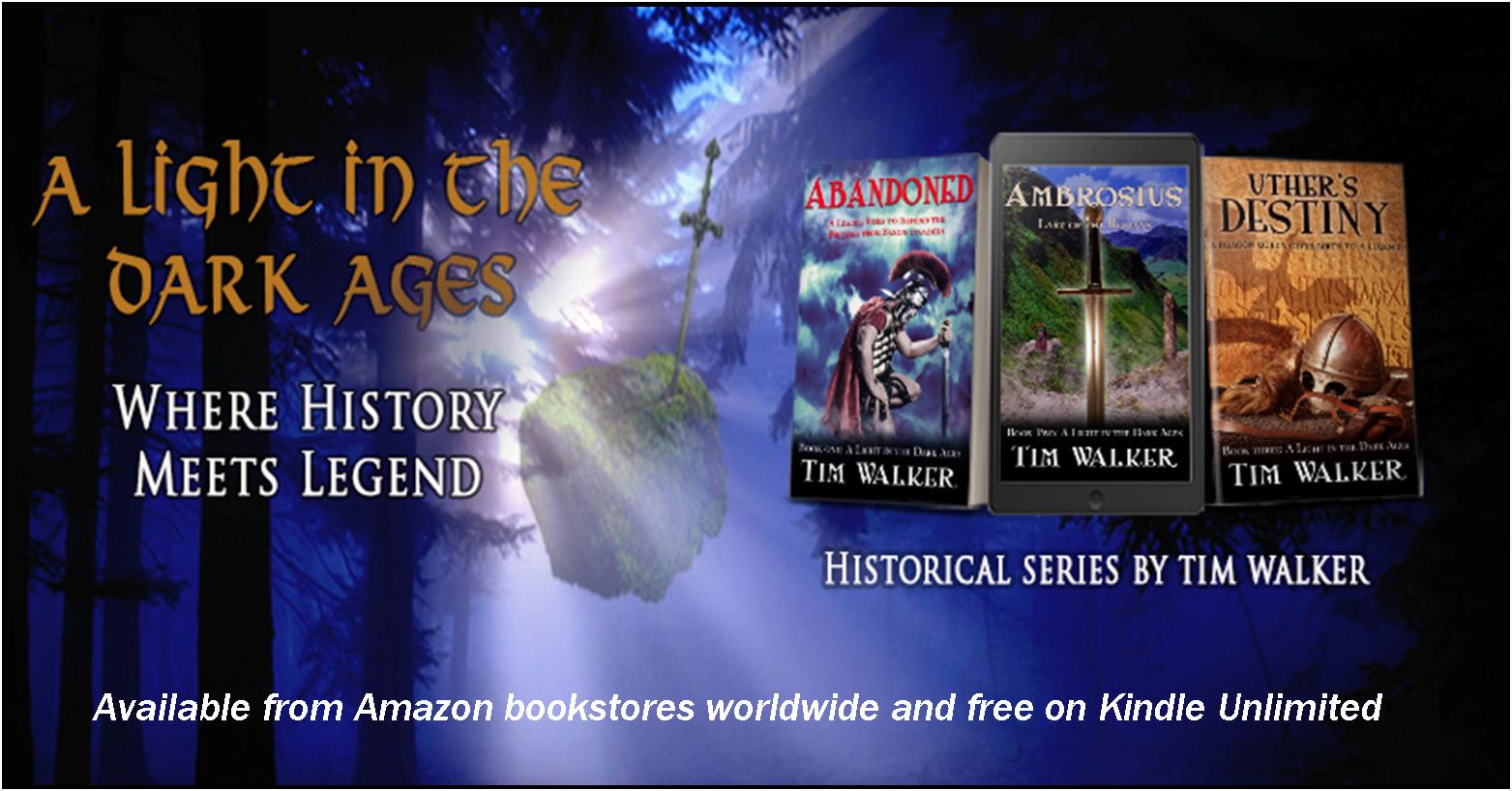 Uther’s Destiny is the third book in A Light in the Dark Ages series, and can be read as a standalone (although readers who enjoy it may want to seek out book one – Abandoned (http://myBook.to/Abandoned) – and book two – Ambrosius: Last of the Romans (http://myBook.to/Ambrosius).

Buy the e-book or paperback or read on Kindle Unlimited: UTHER’S DESTINY

Who is Elizabeth Gates?

Between reading English Language & Literature at Bedford College, University of London, and acquiring an MA in Linguistics at the University of Essex, ELIZABETH GATES explored Europe as a teacher of English and Creative Writing. She then went on to work as a freelance journalist for 25 years, published in national, regional and local magazines and newspapers and specialising in Public Health Issues. These issues ranged  widely including – among many others – stories about suicide among farmers, health & safety on theatrical stage and filmset, bird flu and PTSD in returning service personnel. But eventually, she retired from journalism and turned to fiction.

The Wolf of Dalriada is the first novel in a series and Elizabeth is currently writing a sequel set again in 18th Century Scotland but also in Robespierre’s Paris. Staining the Soul will be published in Autumn 2018. A third novel in the series, focusing even more deeply on the Clearances, is at the planning stage. With more ideas to come. She also writes, publishes and broadcasts short stories and poetry.

When she s not writing, Elizabeth enjoys time with her friends, family and animals. She also loves history and travelling. And she is director of the writing for wellbeing consultancy, Lonely Furrow Company. 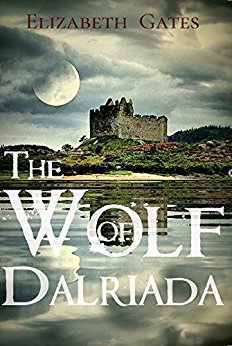 The Wolf of Dalriada – the story
‘Gaelic calls spin a web through the mist in arcs of soft sound. Fear unsteadies the unseen flocks on the scrub heather hillside as men and dogs weave a trap around them in the darkling night. Once the flocks are penned, then the lanterns are turned towards the south. The watchers wait in silence.’
The Wolf of Dalriada Chapter One.

It is 1793… As Europe watches the French Revolution’s bloody progress, uneasy Scottish landowners struggle to secure their wealth and power and, in Dalriada – the ancient Kingdom of Scotland, now known as Argyll – fractured truths, torn loyalties and bloody atrocities are rife. Can the Laird of the Craig Lowries – the Wolf of Dalriada – safeguard his people?

At the same time, the sad and beautiful Frenchwoman, Adelaide de Fontenoy – who was staked as a child in Versailles on the turn of a card – is now living in thrall to her debauched captor, the English lawyer, Sir William Robinson. Can the laird Malcolm Craig Lowrie save the woman he loves?

And can the Wolf of Dalriada defeat enemies who, like the spirit of Argyll’ s Corryvreckan Whirlpool, threaten to engulf them all?

Written with a blend of mysticism, intrigue and psychological realism, The Wolf of Dalriada is an historical adventure novel, with a rich cavalcade of characters  – mystic, heroic or comic –progressing through its pages. Inspired by the historical writing of Phillipa Gregory and Hilary Mantel, the novel challenges any pre-conceptions of ‘romance’ and has been described in review as ‘A great read’!

What moments in the novel do you like best?
I love the moment when we first meet Malcolm Craig Lowrie, the Wolf of Dalriada – when he pauses between attacks to allow the enemy to collect their dead. Although he says little, he feels much. And, when we first meet Adelaide de Fontenoy,  questions about her mysterious life crackle in the air above her beautiful head.  I also enjoy the moment when rich, urbane and witty lawyer Sir William Robinson finds himself drawn into dangers he would have avoided, had he known they were coming. The triangle set up by these characters is, of course, the eternal one.

What moments do you like least?
I found the massacre at Ardnackaig difficult to write (although it flowed from the pen). This event illustrates how closely violent death stalks people perched on the edge of subsistence and this is a timeless message. The death of the loyal sheepdog, Bess, is sad enough but then the massacre of shepherds by a rogue war-band follows, and the scene ends devastatingly with the discovery of the hanging of two Craig Lowrie boys. The impact of this on the clan is terrible and the intended message is  ‘No one is safe.’ Everyone then placed their trust in their clan chief, Malcolm Craig Lowrie – a heavy burden for a young man to carry. Small wonder the name ‘Ardnackaig’ became the clan war-cry.

Is there an important theme (or themes) that this story illustrates?
How did women in the 18th Century ‘survive’ when they were so dependent on male patronage and has survival become any easier in the intervening centuries? I also explored the role of men. Their burdens could be almost intolerable, involving conflicts of ‘love’ and ‘duty’. And this begs the questions: Are the values of ‘duty’ and ‘loyalty’ outmoded? And what can replace them to keep society functional?  Of course, society may undergo huge change – such as  the change prompted by the waves of revolutionary thought emanating from 18th Century France – but you still need to survive. In short, you still need lunch.

What role have the senses – sight, sound, touch, taste, smell -– in the writing of this book?
Phillip Pullman, in his wonderful book, ‘Daemon Voices’, says novels have more in common with film than theatre. I would agree – to a certain extent. ‘Sight’ is the predominant sense involved in the first draft of a novel and in film. You are describing a ‘rolling’ scene so that the reader can ‘see’ it. But theatre and subsequent drafts of a novel, I find, can appeal to the other sense too. As I was writing I found the ‘recall’ of other sensations help me describe a scene, reaching out to shared experiences with readers, helping them to relive the moment. The Scottish landscape is described, using all the senses. Scotland is sensual. And Versailles. And Fashion – which meant so much to the heroine, Adelaide de Fontenoy – also demands blatantly sensual description. So although the sense of sight is very important, the reader uses the other senses too. The author is working with the reader’s capacity to recall.

Which character would you most like to invite to dinner and why?
Sir William Robinson would be my go-to dinner guest. Even if it was in danger of becoming emotionally mired, he would know how to keep the conversation entertaining,. And he – like the Duke of Argyll and Malcolm Craig Lowrie – is a collector of useful information. Because he knows a lot but is also prepared to chat about it, he would be well worth an invitation. The trick would be to encourage him to think that your dinner table is worth opening up sufficiently to gossip.

Where did your research take you? How is research best handled? Historical fiction relies on accurate detail to build up a ‘world’ in which a story can believably take place but, even so, for the reader, the story remains more important than the research. And – even though we may teach through our parables – novelists must not be purely educators. Novelists must remember they are entertainers. As an historical novelist, I love research – people, places, times, customs – but it is better not to dump too much fact in any single scene. You lose your reader.

People say all fiction is autobiographical. Is there a formative experience in your life is the basis for this book?
I suppose this is asking how literature works. Readers can identify with what the author is saying or the characters are experiencing in a story. This encourages a capacity for empathy. Because of their empathic response, readers may also experience catharsis (a release of pent up emotions they struggle with). And readers may – through gaining insights into the problems explored in the story – gain insights into the problems in their own lives. Historical fiction has an extra benefit. It removes the ‘issue’ from the familiar everyday and any new perspective can throw up new insights. One formative experience in my life – which led me to explore the issues in this story – has been a conflict between love, survival and duty. I’m not prepared to say more. But yes, to a degree, The Wolf of Dalriada is autobiographical. I also love Argyll!

Available from all good bookshops and also available to borrow in the UK and Ireland through Public Libraries.

My Vedic Hymn To You

You came to me from Kerala,
Purple and white, your Portuguese
Beauty illuminated me day and night
I wrapped my arms around you, and you grew within my core

I felt your trembling arms reach up,
Caressing my epiphytic roots,
I towered over you as your beauty blossomed.
With each tender caress,
I knew you would be mine forever more.

Rest your sweet head upon my arms,
As Krishna did
So many years, so many eons ago.
He has sent you now,
As a reminder of His power and beauty
As you blossom forever protected within my frame

As you lie within , caressing,
Loving and sharing , My roots ever stronger, strengthening,
As you blossom and flower,
Engorged and radiant,
Your scent transcends, a perfumed heady diaspora
Your sweet nectar flowing, feeding my soul
Your Karma washes over and through me

Intricately entwined,
Enwrapped, entrapped
Infinitely and endlessly interwoven.
Enlightenment achieved,
A oneness, a togetherness,
Rooted in, sharing and growing from the same earth

You came to me,
A material reflection of the spiritual domain,
A shadow of perfected reality,
Slowly unfolding your secrets,
In an intertwined rapturous eternal love
Come amongst us – declared as one of the perfect beings.

This site uses Akismet to reduce spam. Learn how your comment data is processed.

Theme by Anders Norén — Up ↑